FRUITS ZIPPER, a seven-member idol group whose song Watashino Ichiban Kawaiitokoro skyrocketed in popularity on TikTok this summer with over 500 million plays, held their first solo concert ~KIKKAKE~ on September 12, 2022.

Debuting from ASOBISYSTEM’s idol project KAWAII LAB in April, tickets for FRUITS ZIPPER’s first solo concert sold out. Although the group’s name may seem strange, it has a meaning–FRUITS, ‘to bear fruit,’ and ZIP, meaning ‘to give energy,’ is the perfect title for such a young and exciting group. In a short time, the seven members have managed to take on a number of live performances and bring smiles to audiences around Japan. The girls’ efforts over the hot summer months paid off in the form of a totally packed house.

When the lights in the venue dimmed, the audience shined with the seven member’s colors coming from fans’ penlights. A video began playing, and one by one, the members gave their thoughts about what it means to take the stage.

“The existence of idols saved me. I hope that I can be that kind of presence for someone else.”（Amane Tsukiashi）

“I wanted to sparkle. I want to work my hardest.” (Karen Matsumoto)

“Harajuku is a town filled with many different cultures, and that has always given me strength. I want to become someone’s power spot!” (Mana Manaka)

“This was a dream I gave up on time and time again, but I thought it could come true here. I want to spread my wings and become an idol everyone loves!” (Yui Sakurai)

“Music has always been close to me, ever since I was a child. When I was looking for a place I could stay involved with it, I found FRUITS ZIPPER!” (Noel Hayase)

“I stand on the stage to thank the fans who have always supported my becoming an idol!” (Luna Nakagawa)

“I can’t let myself die until I become an idol. That’s what I’ve always thought.” (Suzuka Chinzei)

Yui and Luna showed fierce determination to overcome their past setbacks and stand on stage as idols. Suzuka’s earnest feelings also came through, and each girl’s emotion swept the audience.

As the audience began clapping in rhythm, the seven members took the stage, forming a circle and dancing to the sound of electronica. When the opener came to a close, they released their joined hands, scattering like flower petals with smiles on their faces. 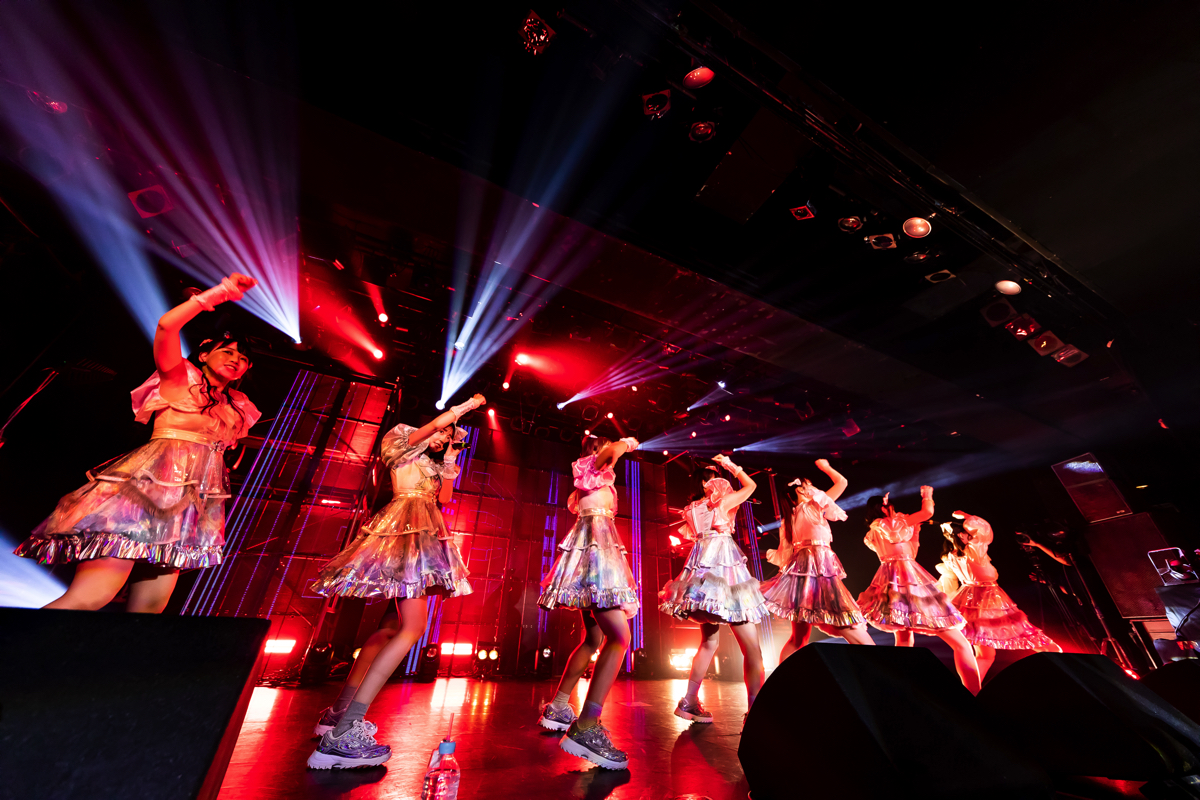 The group opened the show with the classic-sounding idol track skyfeelan. The lyrics of this song were written based on tweets from the members, and each girl sang with feeling and passion. Despite this being their first solo show, the members weren’t at all stiff, instead seeming to relax and totally enjoy themselves.

The girls then continued with their debut song Kimi no Akarui Mirai wo Oikakete. Fans danced along with the chorus, and colorful penlights twinkled everywhere the eye could see.

“It’s been four and a half months since our debut in April, and we’ve been working so hard to make it to this day,” Yui said during the MC portion. “Here at LIQUIDROOM, we want all of you to see what we’ve accomplished!” The multilingual Noel translated the message of NEW KAWAII into English for overseas fans tuning in to the show.

Following the MC, the group took a break from idol-like tracks, performing two of their more cool songs–Re→TRY & FLY and We are Frontier. Even with the overwhelming sound of bass rocking the venue, the girls’ voices were powerful enough to compete. FRUITS ZIPPER only became more expressive with the help of lighting and video, embodying the theme of NEW KAWAII.

Once the members left the stage, the radio program Furuppa Now began playing on screen. The KIKKAKE Reminicense Corner was held to honor the day’s live performance. Each member commented on FRUITS ZIPPER’s activities and what they have led to. The title of the live show, kikkake, means chance, and many doors have opened for the members over the past four months.

Noel, the youngest member at only 17, put her cuteness on display, chatting about how she had started carrying parasols, wearing sunscreen, and learning how to wear makeup. Meanwhile, Mana, the oldest of the group, revealed her belief that “trusting others is a key to self-growth,” going on to state that “doing something alone isn’t worth it. It’s more meaningful when someone hears you or watches you.”

The other members gave their thoughts on what’s changed. “I’ve become more sociable,” Yui said. “I can get out of bed earlier,” Karen bragged, while Amane claimed that it had become easier to hold the microphone steady. Luna was honest, mentioning that she had begun Googling herself. Each member showed their individuality, one of the biggest charms of FRUITS ZIPPER.

Once the radio show wrapped, the members appeared in their new costumes to perform their new song Sekai wa Kimi kara Hajimaru for the first time. The song’s impressive melody combines a glittering idol sound with just a hint of sadness.

During the chat after the performance, Suzuka announced the new song, with her voice beginning to warp and repeat. She laughed it off, wondering if she was beginning to shift beyond directions.

The second half of the show began with the members dancing to the samba rhythm of their song Furefure Summer! during the interlude.

Karen then announced Watashino Ichiban Kawaiitokoro, the audience exploded with excitement, pumped to hear the song that put FRUITS ZIPPER on the map. This song brought people’s cuteness this summer, but the cuteness of the original was too powerful, with the fans almost too happy to function. 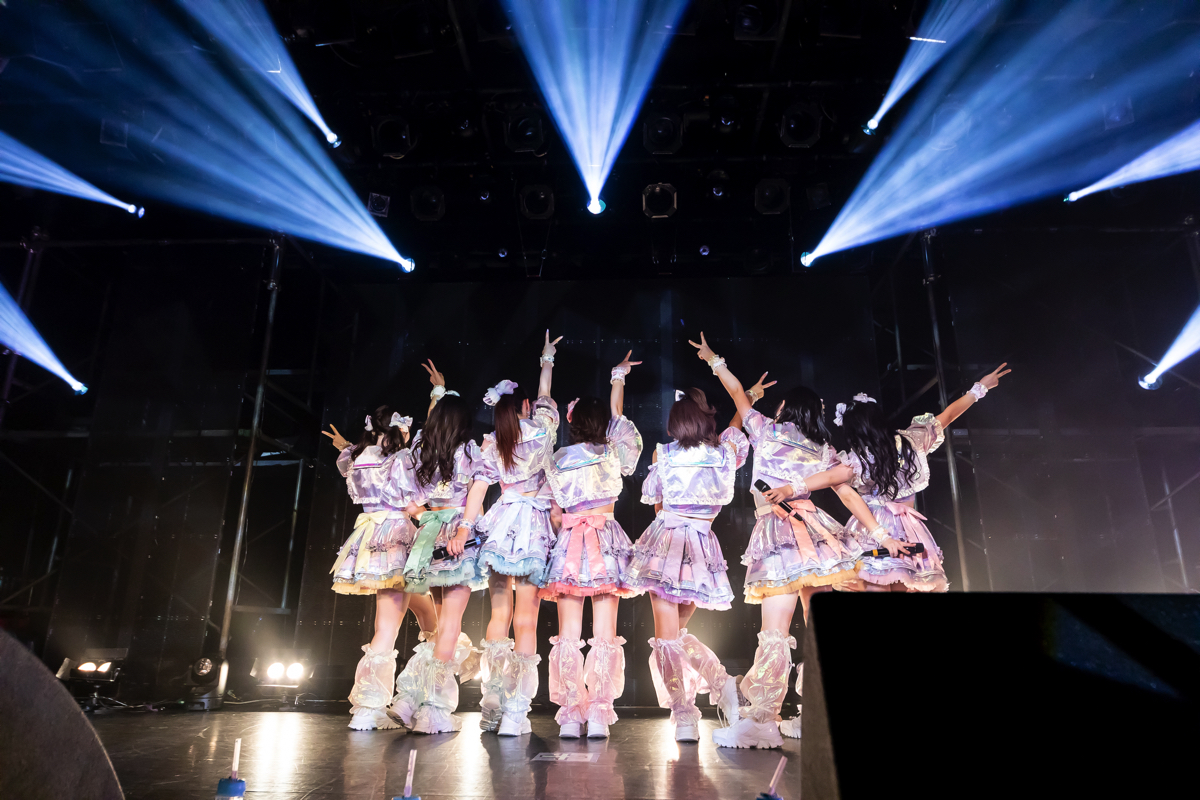 The song Kanpeki Shugide☆ is filled with FRUITS ZIPPER’s determination to fly around the world with no time to rest. The last song of the main setlist was RADIO GALAXY,  and the members danced expertly to the challenging song, with the arrangement, tempo, and melody constantly changing.

After the audience began clapping incessantly, the members once again appeared on stage to perform their new song Sekai wa Kimi kara Hajimaru once again. Once the song ended, FRUITS ZIPPER had some exciting news to share–the girls will be collaborating with the magazine B.L.T. on a new series of articles! They also announced that their second solo concert will be held at Shibuya WWW X on November 11, 2022.

During the final MC, each member gave their thoughts on the day’s performance.

Mana: “Feeling everyone in the audience watching me just makes me feel stronger and more united with the other members of FRUITS ZIPPER. I want to continue our work as one and continue performing in the future!”

Karen: “Since joining FRUITS ZIPPER, I’ve become so aware of how many people support me. Someday, I want to become an inspiration and support to someone else. I want to make someone else out there want to be an idol too.”

Luna: “My dream is to sign my autograph on the backstage walls of live music clubs around the world, so I’ll do my best to make that come true!”

Amane: I’ve been so happy this summer. I’m so fulfilled and I have this amazing sense of satisfaction. I hope that FRUITS ZIPPER will be able to spend many more happy seasons together.”

Noel: “When I joined FRUITS ZIPPER, I realized that chances are something everyone finds on their own. I hope that I can keep taking advantage of the opportunities I find to become a better person.”

Karen: “From now on, I want to be an idol who not only makes me feel happy but also makes everyone else feel happy and entertained. Please keep supporting me as I work my hardest!”

Suzuka: “Thanks to you all, I’m able to look forward to my future with so much support. I want to be that support for everyone too. I sincerely hope that we can keep supporting each other in the future!”

Mana, Karen, and Suzuka were so moved that they nearly began to cry. Until the very end, however, the seven members were strong, determined to communicate with their fans in their own words.

The group’s last song was Watashino Ichiban Kawaiitokoro. A cannon sent multicolored paper blasting across the crowd, making the atmosphere even more bright and fun.

To close the show, Suzuka gave a statement. “FRUITS ZIPPER will continue to move forward along with our motto ‘From Harajuku to the world,’ so please support us!”

The live performance is currently archived on ZAIKO. 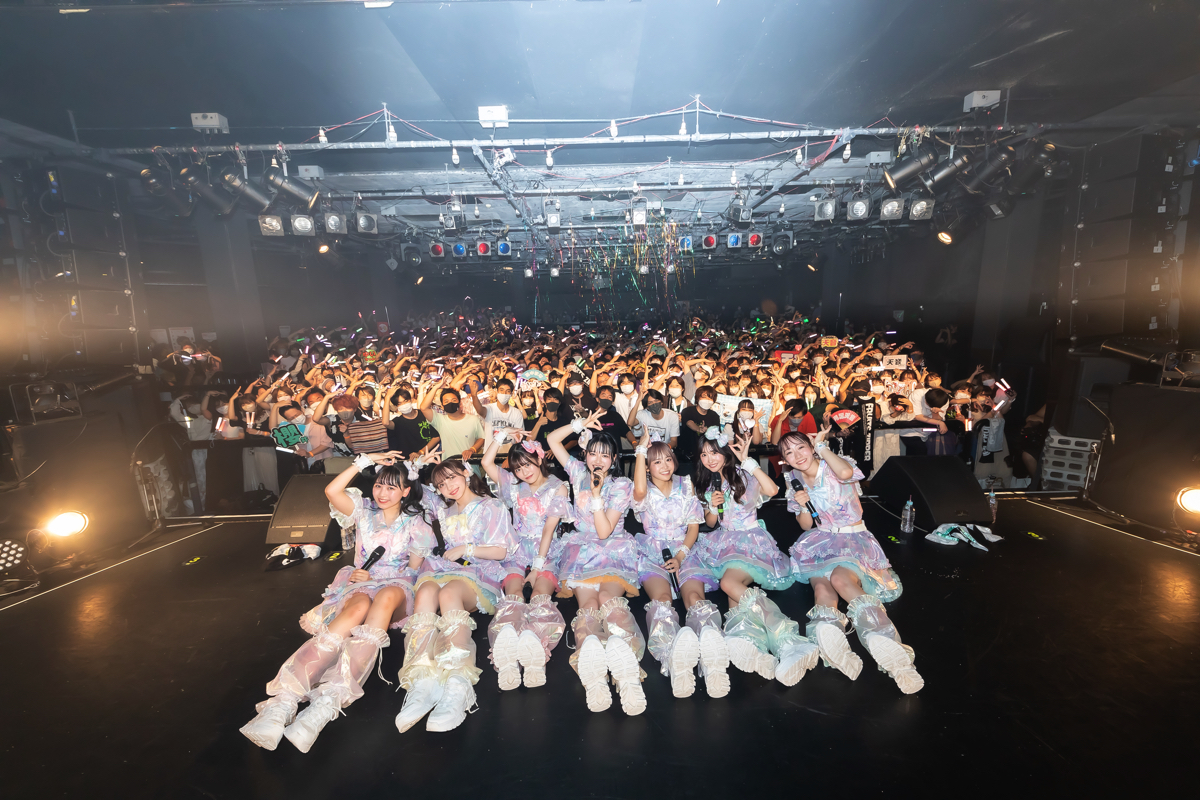 Lawson Tickets: https://l-tike.com/fruitszipper
Pre-Request Payment
Acceptance Period: September 12, 21:00 – September 19, 23:59
*Notes*
・Up to 2 tickets per person per application (no admission for preschool-age children.)
・Tickets will be electronic.
・Transfering or reselling tickets for a fee without the consent of the organizer is prohibited.